The two articles published here were written by "EdenSong Wheatgrass & Beyond Organic Products" and are based on Ann Wigmore's teachings at the Hippocrates Health Institute. They are reproduced here with the kind permission of EdenSong, who are based in North Carolina, USA. You can purchase high quality wheatgrass from them and follow them on Facebook at the link above. 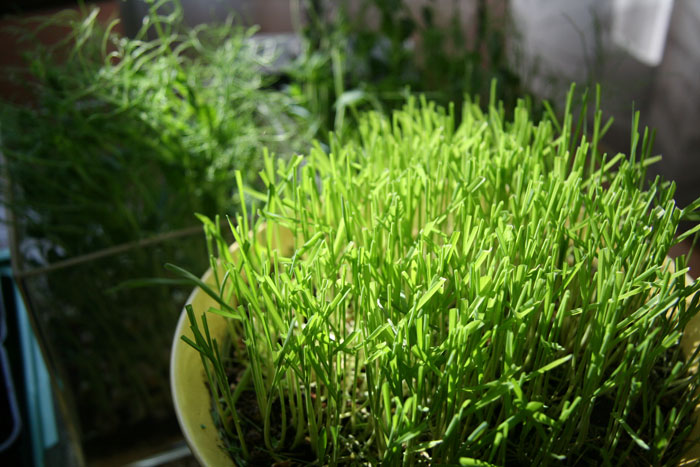 Wheatgrass before juicing. Copyright: Pelagos. To purchase the full-resolution version use the contact form below.

Wheatgrass is one of the richest natural resources of vitamins A, C, D & K and the complete vitamin B-Complex. Wheatgrass is also a natural source of laerril (B-17).

Wheatgrass is the richest source of chlorophyll, which is the 'blood' of plants, with a molecular structure that is almost identical to the haemoglobin molecule of human blood.

Wheatgrass contains beta-carotene, which is found in red, green and yellow pigmented fruits and vegetables. Beta-carotene acts as a scavenger against harmful molecules flowing naturally through the body or through toxins inhaled from cigarette smoke, air pollution and other sources.

What will it do for you?

WHEATGRASS IS THE #1 SUPERFOOD

IT IS ALSO KNOWN AS CATGRASS AS CATS LOVE IT

"What's So Great About Wheatgrass Juice" by EdenSong Organics

Wheatgrass is high in oxygen like all green plants that contain chlorophyll. The brain and body tissues function at an optimal level in a highly oxygenated environment.
By drinking wheat grass juice, one may feel a difference in strength, endurance, health, spirituality and overall well-being.

Thank you again for "EdenSong Wheatgrass & Beyond Organic Products" for giving me permission to publish these two articles!

For more information on the healing power of greens and the legacy of Ann Wigmore, please visit: Hippocrates Health Institute.

Green for Life by Victoria Boutenko - about the difference of a raw food diet with and without greens.
7-Days Water Fasting, Diary Summary
Will It Magically Heal You To Stop Eating for 7 Days?