Vitamin B12 is important for energy production but I only recently felt the full benefits of supplementing with it. This is because the B12 'energy vitamin' can actually be quite difficult, even impossible, to get from foods for many people. We need optimal stomach acid levels to be able to utilize B12, which we all enjoy when we are young, but which tend to decline as we age. Vitamin B12 deficiency is not only a problem vegetarians have but anyone with sleep problems, digestion-related problems, stomach-acid problems, anemia and anyone over 60 is in the risk group to have vitamin B12 deficiency, according to Dr. Mercola. 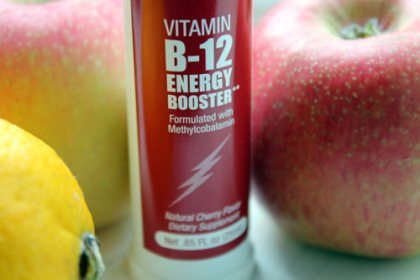 I have been battling with low energy levels for a long time, and although many things I tried have helped slightly, I have not been able to reach optimal energy levels. However, when I started taking Dr. Mercola's sublinqual vitamin B12 (methylcobalamin) spray, I started naturally waking up earlier - I felt quite a significant boost of energy very quickly. Other methods I had tried before were: the raw food diet, juice fasting, Traditional Chinese Medicine (herbs and acupuncture), low-carb diet, sugar-free diet, high-animal protein diet, quitting caffeine, Hair Mineral Analysis, Live Blood Analysis, reducing stress, various supplements, and including vegetarian B12 sources in my diet, namely nutritional yeast and fermented foods. Each of these methods gave some energy improvements - and other benefits - but the end result was that I still needed 9-11 hours of sleep per night to feel rested, and even then I would often feel tired. The hair mineral analysis diagnosed me with adrenal insufficiency and sugar intolerance, but addressing those issues also only brought limited improvements.

I had of course suspected B12 deficiency before and taken supplements plus eaten the foods, but I didn't notice a huge difference. Then Taz recommended by email that I take B12 in the form of methylcobalamin, and I happened to order Dr. Mercola's one. I have Taz to thank for this realization and for experiencing quick energy benefits.

I had one month's supply of the B12 spray and ran out. I then bought another, cheaper, product which was in sublingual tablet form and also methylcobalamin. However, it didn't seem to work as well - in fact I didn't notice any difference. The only reason I can think of why Mercola's product would be better is that it is delivered as fine-mist-spray. But I can't help but think that there may be more to it than that.

I am now giving the tablet supplement another try, taking more per day and waiting until it dissolves under my tongue completely on its own (not chewing it). But I have also ordered more of Dr. Mercola's spray. I will report back to see what happens. 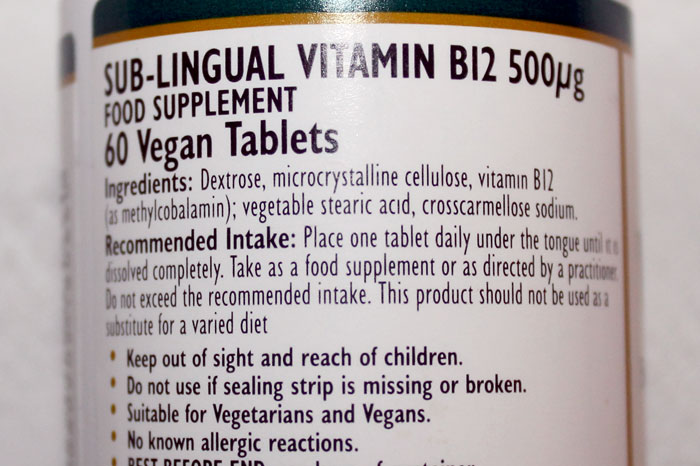 As Dr. Mercola explains, vitamin B12 is the largest vitamin that we know of. Thus it is difficult to absorb by the body. It does not passively diffuse from your gut to your blood stream like most of all vitamins and minerals do.

And as Dr. Jonathan Wright explains in an interview with Dr. Mercola, we need the correct levels of hydrochloric acid in our stomachs to produce a protein molecule called the 'intrinsic factor', which in turn attaches to B12 and enables its absorption into the body and the cells from the small intestine. Without the intrinsic factor, B12 just gets excreted from the body along with all the waste. So without optimal hydrochloric acid levels in the stomach, the intrinsic factor does not get produced and B12 does not get absorbed, regardless of how much meat you eat. This condition is called 'food-cobalamin malabsorption syndrome'.

For the same reason, taking supplements as capsules or tablets to swallow may not help. What is more, many supplements, according to Dr. Mercola, contain vitamin B12 analogues, instead of the true B12, which only serve to increase your body's need for vitamin B12 because they block the uptake of true B12 without providing the benefits. Unfortunately Dr. Mercola says that the same is true of many plant-based sources of the B12 vitamin. This last statement, however, has been disputed by Veganhealth.org.

In any case, you could be eating all the best, most nutritious foods in the world, even an organic raw food diet, and still be lacking vitamin B12. Dr. Mercola says that vitamin B12 deficiency is epidemic among vegetarians but, surprisingly, also very common in meat eaters.

Something to be aware of, Dr. Chris Kresser says, is that B12 deficiency is often under-diagnosed by doctors. He states that many vitamin B12-deficient people have so-called 'normal' levels of B12 because the low end of the laboratory reference is too low. "Experts who specialize in the diagnosis and treatment of B12 deficiency, like Sally Pacholok R.N. and Jeffrey Steward D.O., suggest treating all patients that are symptomatic and have B12 levels less than 450pg/mL." Other markers of B12 deficiency should be taken into account as well.

Vitamin B12 and Sleep

"If you suffer from sleeping difficulties, I recommend taking vitamin B12 during the day. I believe it can help you," Dr. Mercola says.

This is because B12 plays a vital role in melatonin production, which is a 'sleep hormone' our bodies produce at night. Usually, as people age, it becomes increasingly difficult for them to get a good night's sleep. But generally the stomach acid levels decline with age as well.

B12 deficiency causes tiredness and low energy levels, since deficiency causes your blood cells to become very large and to develop a pernicious anemia, Dr. Mercola explains. He adds that B12 is involved in the energy metabolism of every cell of your body.

There are further, indirect energy benefits from B12, among the better quality sleep, discussed above. And improved glucose metabolism can be another benefit of overcoming B12 deficiency:

"Your body relies on the efficient conversion of carbohydrates to glucose - your body's source of fuel. [...] Vitamin B12 plays a major role in that conversion in your body. Likewise, B12 enables your body to convert fatty acids into energy as well." (2) Vitamin B12 also affects DNA and helps utilize amino acids.

Dr. Chris Kresser takes this even further: "It's entirely possible that at least some of the symptoms we attribute to 'normal' aging - such as memory loss, cognitive decline, decreased mobility, etc. - are at least in part caused by B12 deficiency."

Stomach Ulcers and B12

Infection with Heliobacter pylori (H. pylori bacteria), which is a common contributor to stomach ulcers, can also result in vitamin B12 deficiency, according to Mercola.

This is a problem linked to too low stomach acids, as these acids are also responsible for destroying infectious microorganisms.

How to Correct a Vitamin B12 Deficiency?

Get your stomach (hydrochloric) acid levels measured and take steps to optimize these, Dr. Jonathan Wright says. His book: 'Why Stomach Acid is Good for You' may be a useful reference. Note that the use of antacids or anti-ulcer drugs will lower your stomach acid secretion and decrease your ability to absorb vitamin B12, Mercola adds.

You can take vitamin B12 shots, if this option is offered by your Doctor, but supplementing with methylcobalamin spray may be an equally good option, unless your deficiency is severe.

Just keep in mind that "oral forms of B12 in nearly all supplements are practically useless", as Dr. Mercola says.

Once you have ensured normal levels of stomach acid, you should be able to get vitamin B12 from foods. The jury seems to be out on the plant-based vs. animal-based sources of B12, although of course the animal-based products contain much more of this vitamin. Perhaps it would be safest for vegans to supplement with B12 in any case, especially since it has now been reported by some sources that fermented foods do not usually contain B12, as is often claimed, although this is currently under debate as well. 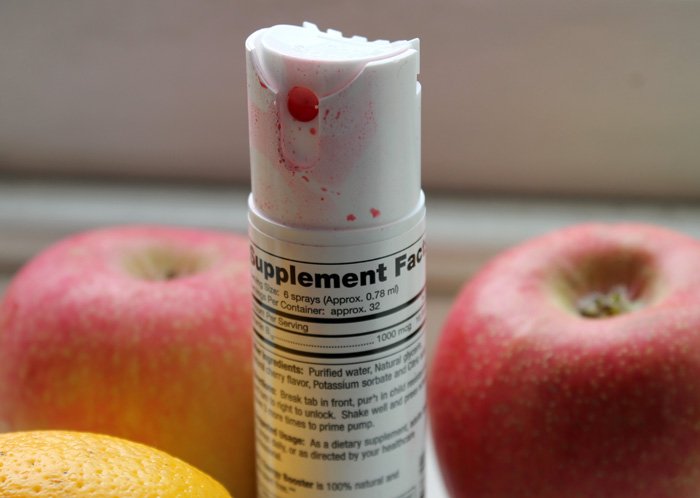 Copper deficiency may be the culprit behind a whole host of problems, including anemia masquerading as vitamin B12 deficiency. More here: "Hyperthyroidism Caused by Copper Deficiency?"