The Himalayan nation of Bhutan is set to become the world's first 100% organic country within the next 5-10 years. By then they aspire to be wholly organic in their food production. 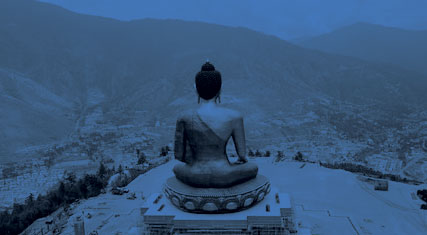 The Kingdom of Bhutan enjoys many nicknames, such as 'Hidden Treasure', 'Mountain Fortress of the Gods', or 'Switzerland of Asia'. It is already the world's leading example on organic living and the country's position in the Himalayas, landlocked by mountains, has helped to safeguard it against modern pollution.

Bhutan has no fossil fuels or nuclear energy, but they sell hydro-electric power, which they have enough surplus of to be the only country whose largest export is renewable energy. It is also the only country that absorbs more Co2 than it lets out.

70% of land in Bhutan is covered by trees, 28% is protected, and 9% is designated as biological corridor. Both Bhutanese and tourists are obliged to help protect the natural environment.

Bhutan has a unique policy of 'high value low impact tourism', and tourists have to pay a daily tariff of around $65 to support the government in projects in education, health, infrastructure and other programmes. Healthcare is completely free for all Bhutanese and foreigners as well.

Tobacco, plastic bags and the killing of endangered species is banned.

The country is still looking for practical natural solutions to a few pest and disease problems and recently brought together an international panel of organic experts to discuss solutions.

"Farmers get quite excited when they use chemical fertilizers for the first time because they see that they have to do less work, less weeding" but over a longer period of time they see that the soil is destroyed and yields decrease year-to-year, Pema Gyamtsho, the previous Minister of Agriculture and Forests says.

Gyamtsho says that step-by-step approach is important for the success in zero pesticides use: region-by-region, product-by-product. Any moves to eradicate chemicals need to be done on a voluntary basis and it is for the government to demonstrate to the farmers that the benefits of fully organic agriculture outweigh the costs, he explains. Investment into agricultural research as well as support to farmers though the conversion process are important.

Return from: "Bhutan Set to Become the First 100% Organic Country in the World" to: Homepage
Copyright © cheap-health-revolution.com - All rights reserved.