Bee Sting Home Remedies are listed below. When stung by a bee, it is generally advised that you will try to carefully pull out the stinger as soon as possible. You can use a sharp-edged object along the sting to remove the stinger but try NOT to squeeze the stinger because more venom can go into the skin.

If you have a reason to believe that an allergic reaction to the sting may be taking place, call for emergency medical help immediately.

If treated quickly and no allergic reaction is present, the inflammation, pain and redness caused by the bee sting can radically lessen in 1-2 hours. It may also take longer but if you have any difficulty in breathing or other signs of allergy, contact a doctor urgently. If the redness and swelling persist after 12 hours, you may wish to contact a doctor also, who will most likely prescribe antibiotics for an infection.

The best bee sting home remedy reported seems to be cold ice pack pressed for quite a long time, and raw onion juice in between ice packs on the skin. Anything that helps fight inflammation may help as well, so personally I would be drinking chaga mushroom tea and eating broccoli sprouts, berries, turmeric, colourful vegetables and fruit, and other antioxidants. Plenty of water is also very important in fighting the inflammation caused by the bee sting. 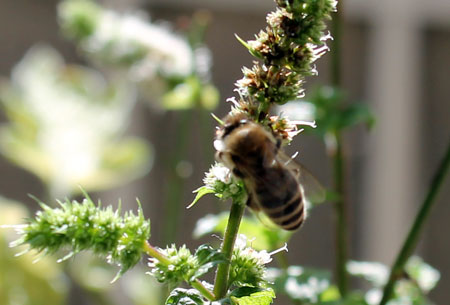 Bee venom has been used by Dr. Lawrence Cohen, Dr. Christopher Kim and others as an arthritis pain remedy. The doctor has been reported to inject honey bee venom into arthritis sufferers to eliminate the pain both temporarily and long-term. Also multiple sclerosis (MS), high blood pressure, asthma, hearing loss, numbness of the arm or leg, and premenstrual syndrome have been treated by bee venom by USA-based doctors. The bee venom therapy has been called apitherapy and the treatment was already used in Ancient Egyptian and Greek times. Lawrence Cohen states that bee venom contains mellitin, which is an anti-inflammatory compound hundred-times stronger than cortisone. Adolapin is another substance in the venom which both pain-blocking and anti-inflammatory.

In addition, honey-bee venom taken internally or applied on skin in cream have been linked to anti-cancer and anti-aging effects, among other health benefits. Bee venom is sold for more than £1000/ gram according to a report in the Telegraph newspaper but has been deemed unsafe in the EU because of potential allergic reactions. ("Food Watchdog Bans 'Miracle' Bee Venom Honey")

Raw foodists may be able to tolerate bee stings better, according to some reports. Also, getting stung regularly has been shown to increase immunity to the effects of the sting, as is known by many bee keepers.