This mushroom pie has a very creamy and tasty filling, even though it's dairy-free. The pastry is replaced by a thin layer of potatoes at the bottom and on top, and the usually cheesy crust on top is replaced by a mix of nuts, dates, oil and salt. The secret ingredient in the filling as well is dates, as the slight added sweetness brings out the flavours nicely. Cashew nuts are used in the sauce for creaminess, and they add extra protein. Onions, mustard, and rosemary are used for more fulfilling flavour. If you want a mushroom pie which is not gluten- and/or dairy-free, you can use the tasty mushroom filling, and just use a pastry of your choice (such as filo) instead of potatoes and goats cheese, for example, on top. This is not the kind of pie you can cut neat slices off, however! Once you cut into it, it gets completely messed up! 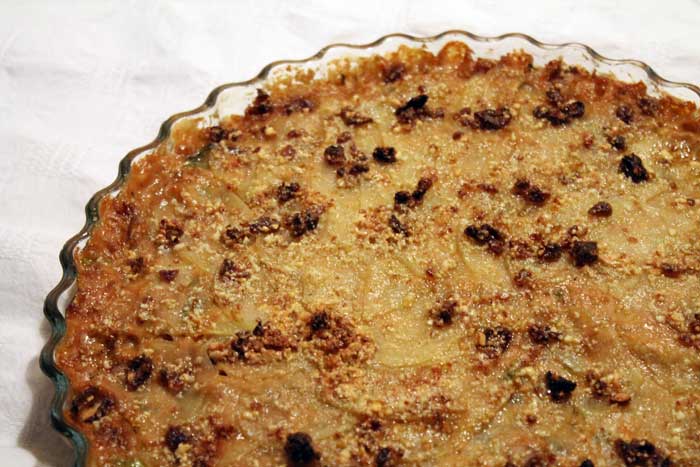 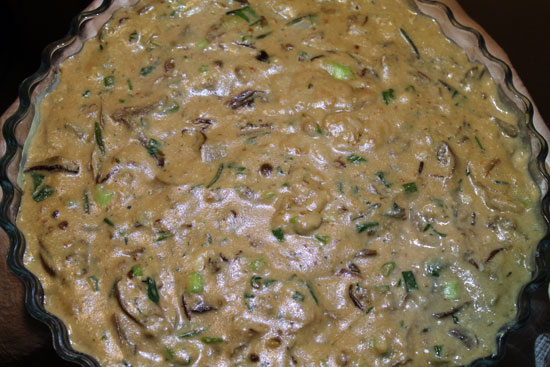 Variations on This Mushroom pie Recipe

This mushroom pie recipe was inspired by a mushroom and goat's cheese filo-pastry pie, so another option - if you don't want to be gluten-free or dairy-free, is to use filo pastry at the bottom instead of potatoes, and goat's cheese on top instead of the 'fake cheesy crust' and potatoes. Butter can be used instead of olive oil. Instead of cashew nuts and water you can use sour cream in the sauce.

The mushroom sauce can be used on its own as well, without making it into a pie - it is very tasty!

How to Vary Other Recipes

Basically, most recipes using filo-pastry, can be made gluten-free, by either using thinly-sliced potatoes or cooked cabbage leaves to replace the pastry. In both cases it is important to make the 'fake pastry' taste good (and not bland) by either brushing with olive oil and sprinkiling with salt, or brushing with syrup water (i.e. some dates mixed with water). Flavoured oils can also be used to a great effect, such as chilli oil or garlic oil, which can very easily be made at home by just filling small bottles with olive oil after stuffing them with chillies, or garlic, etc, and leaving them in a cool, dark place for a week or two, until the preferred flavour develops.

Instead of cream, the cashew nut and water mix can be used, as described in this recipe. Whether the stock and/or dates need adding depends on the recipe.

Cheese crust can be always be replaced by making a mix according to your personal taste or cashew nuts (more) and dates (only a little), quite a bit of salt (as cheese is salty) and oil to make the texture more like 'melted cheese'. Other flavours such as chillies, black pepper, garlic or herbs are optional.

So there you have it! Many of the pastry and cheese recipes can now be made healthier, and even cheaper! But still tasty.

See the healthy, cheap recipes link at the bottom of this article for more ideas on gluten-free bread, healthy pizza and pancakes, and protein-rich food substitutions for your typical carb indulgements!

This mushroom pie recipe is a variation of the 'New Food for Thought' vegetarian cookbook recipe for: 'Wild Mushroom and Goat's Cheese Tart'. The Food for Thought restaurant is a small and famous restaurant in the heart of London's Govent Garden. It is one of my all-time favourite places for vegetarian food in London, and I definitely recommend you visit - but arrive early as it is difficult to get a seat - the place is tiny!