"It is said to have similar properties to that of ginseng. Fo-Ti is one of China's great four herbal tonics (Fo-Ti, Angelica, Lycium, and Panax Ginseng)..." (The Root of the Matter 1)

"The literal English translation of [fo-ti's] name is "vine to pass through the night." With a distinctive sweet yet bitter taste, fo-ti was thought to unblock the channels of energy through the body, allowing the escape of the pathogenic influences that cause generalized weakness, soreness, pain, and fatigue. Depending on the method of processing, there are four different types of Fo-Ti on the market: raw, cured, wine, and steamed. [...]

"The Chinese nickname for the herb, ho shou wu, literally means "Mr. He's Black Hair," Mr. He being a man of Chinese legend who restored his youth and sexual potency by taking Fo-Ti tea. Chinese tradition teaches that the herb should be used by itself or cured in the water used to cook black beans for this purpose. [...] The production of traditional Fo-Ti root according to traditional Chinese medicine is revered and is kept as a close secret, however the basic process involves curing raw Fo-Ti roots in a soup of black bean sauce and wine."

The Reported Benefits of He Shou Wu Root

The reported benefits of the amazing He Shou Wu root are listed below. I will use the different names for this herb throughout the text. 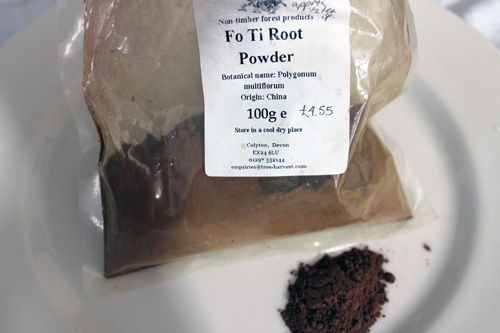 A bag of fo-ti root powder purchased from Tree Harvest.

Keep in mind the following things when thinking of consuming He Shou Wu:

He Shou Wu Quotes and Folklore

Chinese ancient myths regarding the He Shou Wu root are continued here from above:

"Ho-Shou began with the legend of the impotent Chinese man who was 58 years old and was trapped by a flood in the mountains for seven days. The only food he ate was the Fo-ti herb, later known as Ho-Shou-Wu. He developed a strong sexual desire and fathered several offspring. One of which was named Ho-Ven-Shiu which was an outstanding offspring who lived to be 160 years of age. Hisson Ho-Shou-Wu lived to the age of 130 and died with black hair. A modern Chinese herbalist Li-Chung-Vun lived 256 years of age, was married 24 times and looked like a young man of 50 when he died. His secret: one should have a quiet heart, sit calmly like a tortoise, walk sprightly like a pigeon, and sleep soundly like a dog. He drank Ho-Shou-Wu and ginseng daily."
- The Root of the Matter 1

He Shou Wu soup with black beans. Thank you for the image: eat.omy.sg

"For a further look at the real herbal lore behind ho-shou-wu, the herb is described in the following passage in Li Shizhen's famous compendium of 1578 (published posthumously in 1596), Bencao Gang Mu (8):

Below are testimonials of using Fo-Ti from therootofthematter.net. These refer to the black bean processed fo-ti.

"I make a slow cooker tea (Yes, we purchased a slow cooker on your recommendation) of your Fo Ti and Schizandra berries Wow! It almost makes me wonder how people can do without food like this."

"[Fo Ti] is great stuff, and both our aches and pains are being felt again without it. [...] Al has had back pain, stiffness and less flexibility than he would like. With the Fo Ti daily he is much better, less to no pain, more flexibility, quicker recovery from sports exertion. I was having neck stiffness and mild joint pain before using it. With daily use my neck feels great, I can turn a greater (normal) radius, my joints feel great!"

"Just wanted to let you know I have been taking the maral root and fo ti root and I LOVE THEM! They give me energy, clear thinking and a peacefulness during very stressfull times. I also noticed my tendon pains are less in my arms! Awesome stuff."

"I've gotten myself a crock pot and have been crocking Fo-Ti, I think its pretty great stuff. And really like the smell & taste. I really like how relaxed it makes me feel, it beats the hell out of valium or xanex which occasionally I've had call upon. Also, the prospect of being a kidney tonic has me quite excited..."

"I just tried the fo ti by leaving a handful in boiling water for 10 mins and then drinking; I loved it. I felt very slightly stoned and giggly afterwards - is that normal?"

Fo-ti Root Dosage and How to Use

"Must take in moderate doses. Do not use over 15 grams of pure root at a time as it may cause stomach pain." - Savvyteasandherbs.com

I bought 100g of organic fo-ti root powder from Tree Harvest here in the UK for £4.55. It is much cheaper to get it as wholefood instead of capsules or supplements.

He Shou Wu Sources Referenced Above

Return from: 'He Shou Wu' to: Foods That Heal
Copyright © cheap-health-revolution.com - All rights reserved.