History of Naturopathy in Europe

This history of naturopathy in Europe is based on a treasure of an old book by a famous Finnish botany and natural medicine researcher and lecturer, Prof. Toivo Rautavaara. The book is called (translated) "The Way Nature Heals" and includes within it a brief record of the history of European natural healthcare, spanning from Hippocrates in 460 BC to the publication date of the book, 1951. I have created an even shorter version of this fascinating account of Rautavaara's book in this article (translated from Finnish).

Definition of naturopathy from the British College of Osteopathic Medicine website:

"Naturopathy, frequently called naturopathic medicine, is a system of treatment and healthcare that supports the body's innate ability to heal itself through nutrition, exercise and life-style advice. It is a holistic system that believes that good health is not the same as absence of disease [...] Naturopathy may be beneficial for a wide range of chronic conditions as well as a general practice for living well. It draws on a wide range of therapeutic disciplines - known as 'modalities' - and may help to avoid surgery and excessive medication." (www.bcom.ac.uk)

Note that although it is not mentioned in Toivo Rautavaara's book, there is good reason to believe that Hippocrates was trained by the Ancient Egyptian medical system.

(Update: View an Iranian raw foodist's criticism on Avicenna's teachings in this interview.) 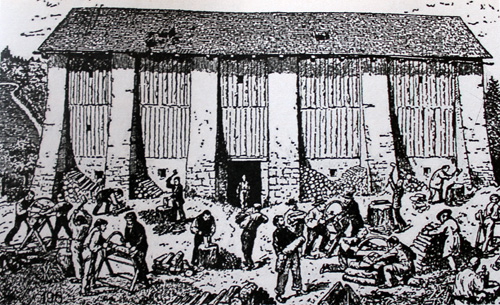 Grafenberg Sanatorium, instead of exercising, the patients chopped wood outdoors. 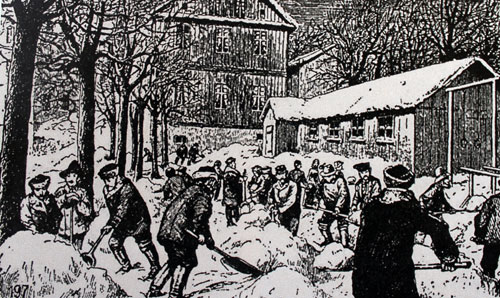 In Germany natural medicine has been more integrated into mainstream healthcare and medicine than in the rest of Europe. The therapies used include electro-acupuncture, hydrotherapies, physiotherapy. At the time of publication of this book (1951) Western Germany already had thousands of Doctors who were trained not only in mainstream medicine but were also natural medicine specialists (certified through the organisation: 'Physikalische Medizin und Rehabilitation'). 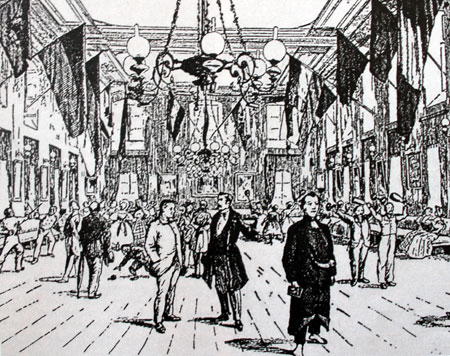 Priessnitz (in the middle, white coat) at the Grafenberg Sanatorium. Patients exercising in the background. Indoor exercise was described instead of outdoor work during bad weather.

The Status of Natural Medicine in the World in 1951

At the time of publication of this book, in 1951, the status of Natural Healthcare and Naturopathy in the World was explained by Toivo Rautavaara as follows.

In Finland only a certified Doctor was qualified to cure sick people. The Medical Board of Health (Laakintohallitus), a government agency, decides which are the scientific and approved methods of curing each disease. A doctor can recommend any healing modalities he desires but at his own risk. If his recommended approach fails, he can be trialled and he can lose his licence.

Only massage therapists, physiotherapists, and chiropractors have the license to provide hands-on therapies. A natural therapy centre is only allowed to receive and treat patients if they are supervised by a licensed Doctor. Laymen are allowed to advice on health and lifestyle matter but not cure diseases.

Various other countries have many types of healers as well as traditional Doctors. In Sweden there are operating homeopaths, who are not licensed Doctors. In Germany there are 'heilpraktiker' (healing practitioners), who provide homeopathic treatments and other natural treatments. In France there are only a few more Doctors than other healers. In Italy there are more than 10,000 herbalists, who hold University Degrees in herbalism. In England and the USA the old tradition of many types of healers is being continued, which include 'spiritual healers', who are able to give healing energy to the patients just by touching them. Their skills are officially recognized and even hospitals sometimes request their help.

In the Soviet Union (now Russia) the healing arts have been well-developed. Especially a large variety of healing herbs have been widely used. Research establishments have kept record of these plants and performed pharmacological studies on them. Doctors and even pharmaceutical companies are continuing the work of natural healers but traditional healers operate as well.

Interesting situations have developed in ancient civilizations such as India and China, who had developed their medical systems thousands of years before the birth of European medicine.

English conquerors brought English Doctors and Universities to India, with medical research departments. The Indian traditional medical system, Ayurveda, was not discarded but included within University studies. The modern researchers perform studies on the traditional treatment methods. Yoga and other Indian spirit and body treatment and exercise methods have spread to Western countries as well.

The Traditional Chinese Medicine system was untouched by foreign powers but Chairman Mao, for example, could not appreciate its importance but wanted Doctors to be trained by Western methods. At the same time, aspects of Chinese medicine, such as acupuncture and the study of meridians were introduced to Western countries. In China there are hundreds of thousands of educated Herbal Doctors who function as part of the healthcare System.

The traditional healing methodologies of the middle-Eastern civilizations, such as Sumerians, Assyrians and Phoenicians have disappeared. The European conquerors also destroyed highly-developed medical systems when they destroyed the cultures of Atzteks, Incas, Mayans and various African peoples. The World Health Organization has lead the establishment of Western Doctors, hospitals and pharmaceutical companies' products into the third world countries.

More recently (still in 1951) both the governments of these countries and the WHO have realized that these peoples prefer their traditional healing methodologies over Western medicine and treatments. In addition there have been discoveries that the traditional healers have herbal and other treatments which are effective against illnesses that the Western Medicine can't cure. They have effective treatments for example for blood pressure, diabetes and even cancer. Moreover, they know their patients personally, the patients trust them, and the treatment modalities are appropriate to the local cultural norms. Today the Western doctors going to work in these countries are advised first of all to establish a connection with the local healers, to respect their work and to seek to collaborate with them.

Note: The information in this article was entirely based on the following book: Toivo Rautavaara: Miten Luonto Parantaa, 3rd edition (WSOY, 1980) and was translated from Finnish. The first edition was published in 1951.

The British Naturopathic Association website has a short histories of naturopathy in the UK and the world ( naturopaths.org.uk).

My visits to various Naturopaths - a collection of articles.
My visit to Traditional Chinese Doctor

Return from: History of Naturopathy in Europe, to: Holistic Practitioners
Copyright © cheap-health-revolution.com - All rights reserved.