Eat spirulina daily for amazing benefits for health, immune system, energy, skin, overall strength and beauty, protection from radiation, and more! The health benefits of the superfood spirulina are discussed in this article.

Spirulina is a blue-green algae, which can be harvested from certain fresh water lakes or cultivated in water tanks. It is a very dark green colour and has a gel-like consistency when mixed with water. In addition to being a nutritional aid, spirulina can be mixed with aloe vera gel or similar into a thick paste and used as mascara and eye-liner! The deep colour is a sign of the high antioxidant content of spirulina.

I love the idea of using a high antioxidant superfood on my skin instead of chemical make-up. I try to avoid eye-liners these days, unless it's a special occasion, since I've noticed that the skin around my eyes suffers from it. But spirulina as make-up should have the opposite effect!

Spirulina is 48%-71% protein, which, according to David Wolfe, is the highest protein content of any food. It is a 'complete protein source', meaning that it has all the eight essential amino acids. It has been said that raw vegetable protein sources are better than animal protein sources, because we are receiving amino acids, which are the body's building blocks of proteins, instead of ready proteins, which the body then has to take apart into their amino acid components.

In addition, according to research done by the Max Planck Institute, cooking makes some 50% of protein unusable for the body because the protein structure gets altered. Sometimes these 'glued-together' amino acids, that result from heating up protein, become very toxic and impossible for the body to use.

"Each gram of spirulina protein is four times more absorbable than the same gram of protein in beef."
- David Wolfe 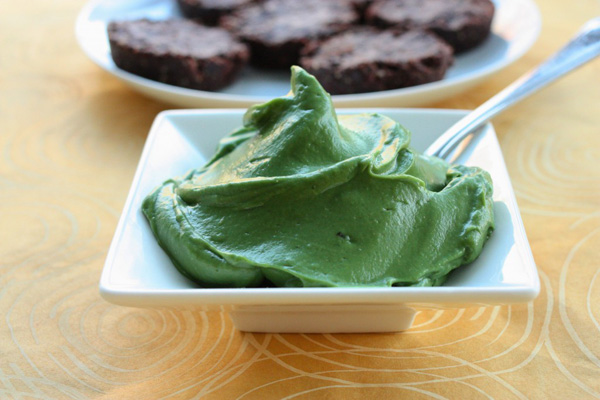 So spirulina is an amazing source of calming and mood-enhancing amino acids but it has been reported to cause constipation as well so drink additional water on the days you take spirulina.

The Benefits of Chlorophyll

Spirulina is very rich in chlorophyll, which is the green pigment of the plant. Greens are one food source that no-one objects to being healthy. Chlorophyll has been associated with better oxygen carrying capability of the blood, enhanced energy, better moods - a calming effect, better skin complexion (people who drink many green juices often look more 'tanned' and less pale) and many other benefits discussed here (wheatgrass is high in chlorophyll too): Ann Wigmore: Benefits of Wheatgrass Juice.

In addition, the Hippocrates Health Institute has a lot to say about the benefits of chlorophyll so I recommend visiting their website for free articles on the topic.

Spirulina has as much iron as red meat and it may thus help alleviate anaemia, increase hemoglobin, improve blood quality and increase red blood cell formation.

In addition, spirulina has five times more beta-carotene (vitamin A) than carrots, for cell-protecting benefits. It is also rich in vitamins B1, B2, B6, E and K. 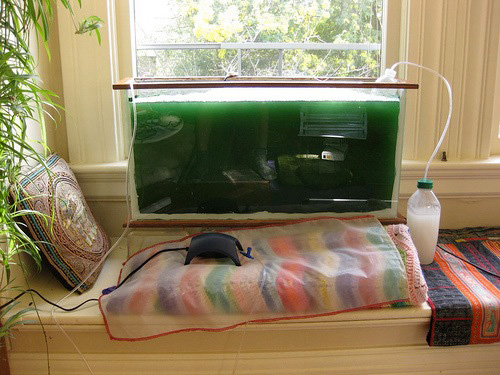 The website of Croatian Center of Renewable Energy Sources (CCRES) works on biodiesel from microalgae, fish food and protein for the food industry. The website has a lot of information on cultivating spirulina.

Spirulina has a vitamin B-12 content which is 3-4 times higher than that of animal liver but Dr. Gabriel Cousens' research shows that this vitamin may not be available to human body from spirulina.

It is, however, very mineral-rich and has within it: iron, potassium, magnesium, sodium, phosphorus, sulfur, calcium, etc.

Spirulina is the best source of gamma-linoleic acid (GLA), which is an anti-inflammatory essential fatty acid necessary for healthy nervous system. 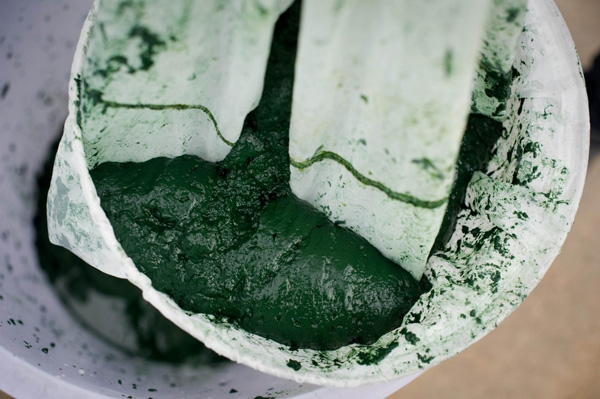 Spirulina is thick and slimy when mixed with water.

An exotic and unique nutrient only found in spirulina is phycocyanin, which is responsible for the dark-blue colour that is also present in addition to chlorophyll in this blue-green algae. It helps induce the production of more stem cells that are found in bone marrow.

Spirulina is high in iodine and also has essential fatty acids and polysaccharides within it. The vast spectrum of anti-oxidants spirulina contains include: beta-carotene, chlorophyll, zeaxanthin, superoxidase dismutase (SOD) and phycocyanin. According to David Wolfe, spirulina can be mixed with raw organic coconut oil and raw organic cocoa butter and used as a natural sunscreen on the skin because of its antioxidants.

"Spirulina is so rich in nutrition that it is believed by some that you could live on spirulina alone for quite some time."
- David Wolfe, Superfoods, p. 109

Astronauts use spirulina as space food, presumably because it has one of the highest nutrient contents of all foods and because it can be stored for a long time in dried form.

"[Spirulina is] one of the most nutrient-packed dynamos of the superfood world."

In addition to the benefits associated with the above lists of nutrients, spirulina has also been shown to strengthen the immune system, and make one's skin and hairy shiny, strong and soft. It helps fight inflammation and arthritis and it can reduce allergies. It can improve physical strength, flexibility, complexion, and strengthen the liver and the pancreas. Spirulina also helps the liver the nervous system to detoxify poisons. It may also help against the herpes virus. 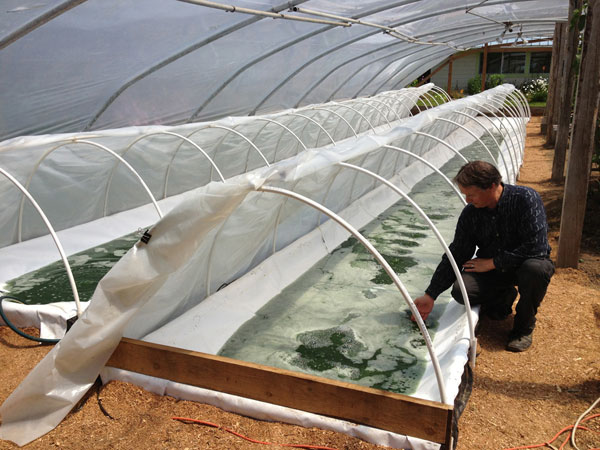 "The antioxidants in spirulina had to protect this algae and its DNA from ultraviolet radiation early in the Earth's history, when the atmosphere was much thinner than it is today and the plants were mostly blue instead of green, due to differences in our sun's spectrum of radiation in the Cambrian geological period. When we ingest spirulina, its antioxidant green-and-blue pigments become available to our cells and thus we become more significantly protected from ultraviolet radiation at cellular level."
- David Wolfe, Superfoods, p. 113

Spirulina grows naturally in tropical climates, such as the lakes in Africa and South America, and it needs a high temperature environment to be able to reproduce and survive. It was eaten as food by at least two ancient cultures, namely the peoples of Mexico City in Central America and those in the area of Lake Chad in Africa. In fact, David Wolfe writes that spirulina was the primary protein source for citizens of Mexico City for several thousands of years. Since it is classified more as food than a supplement, it should be safe to eat regularly as long as it grows/ was grown in clean water. Toxins in the water can get concentrated into spirulina, including heavy metals, so check where your spirulina comes from and make sure it is clean. 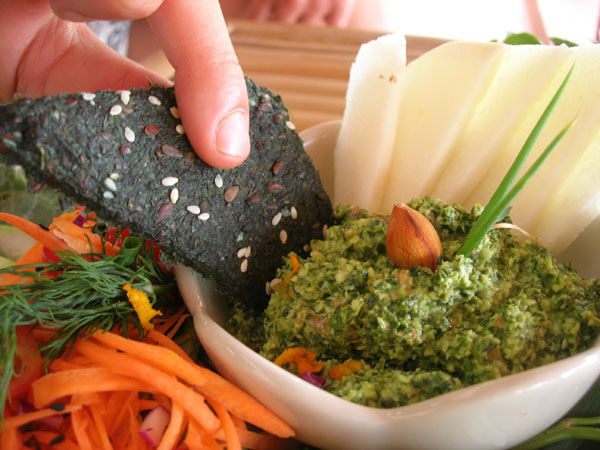 Great-tasting spirulina crackers can be purchased from SAF, for example, and eaten with spirulina pesto. Image credit: yogifood.wordpress.com

"As one of the simplest life-forms, spirulina has an extraordinarily long history of helping to sustain and develop the food chain. It is clear that ancient algae and plankton life-forms from the Earth's lakes and oceans provide the fundamental nutrient and food sources for all life. They are the basis and beginning of the food chain. Through photosynthesis algae and plankton convert sunlight into pure protein, fatty acids, carbohydrates, and nearly every other nutrient essential to life."
- David Wolfe in 'Superfoods: The Food and Medicine of the Future', p. 108

I have personally in recent times been eating spirulina often, approximately one heaped teaspoon per day, usually mixed with a lemon or a grapefruit in a blender - this seems to help to mask the strong taste. Spirulina mixed by hand in water won't work as it will clump up and become slimy and horrible. In my view you definitely need a strong flavour to mask the flavour of spirulina.

A quick search on the internet also revealed other clever recipes for spirulina, such as: spirulina mango pudding, spirulina honey, spirulina seasoning salt, spirulina hummus, spirulina oat-mango-ginger-smoothie, jalapeno and spirulina hot sauce, spirulina date-and-nut enery bar, dehydrated crackers and crips, spirulina pesto, spirulina ice cream, spirulina and avocado salsa, yoghurt cream dip. Some people also seem to have cooked recipes including spirulina but perhaps a better option would be to mix the spirulina into rice or quinoa after cooking, or sprinkle it on food, to lessen the damage done to the nutrients by heat.

I suspect spirulina would also make a great salad dressing when mixed with wasabi powder, lemon juice and olive oil. You could also probably add spirulina to home-made fruit leather before dehydrating.

Dosage: David Wolfe recommends 3-30+ grams of spirulina per day depending on the individual. 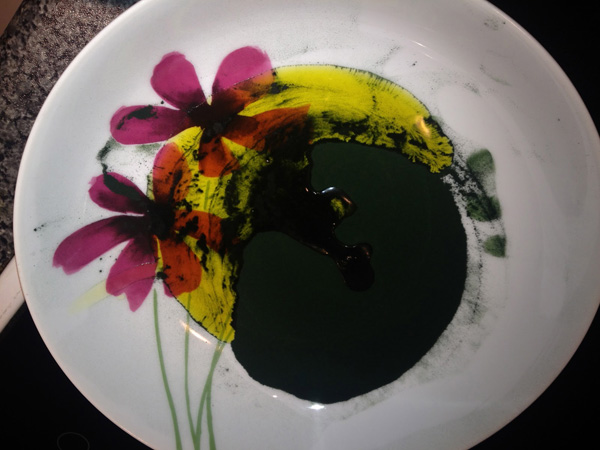 Spirulina has plenty of antioxidants and thus is beneficial for the skin in the form of a face-mask, for example, for a youthening effect. Image credit: lovenaturalbeautyjunkie.blogspot.com

Other ideas for how to use spirulina: mixed into home-made soap, as food colouring (the pigment is very strong) and to dye fabrics.

To use fruit or vegetables to dye fabrics, you have to boil water with your fabric in a sauce pan and salt or vinegar to fasten the colour to the fabric. E.g. for dying a white t-shirt with a vegetable, such as onion skin, spinach, beetroot, savoy cabbage or red cabbage and as explained on Planet-science.com: "Dye Your Clothes with Food":

Boil 2 litres of water, 65 grams salt, the vegetable and your t-shirt for 20 minutes (simmer gently) and leave to soak over night after boiling. For dying a white t-shirt with fruit: use one litre of water, 250ml vinegar, and 350g of fruit, together with your t-shirt and boil/simmer and soak as above. Fruit that can be used include blackberries, raspberries, strawberries, blueberries, etc.

To dye fabrics with spirulina a similar method can be used but you will have to experiment with the quantity of spirulina required.

Spirulina - World Food: How This Micro-Algae Can Transform Your Health and Our Planet:

Spirulina - World Food: How This Micro-Algae Can Transform Your Health and Our Planet: