Copper as a nutrient is important for the body but unless the body can utilise it properly it collects in the tissues and becomes toxic. Specifically, copper has to be bound to proteins by the liver before it can be safely utilised. Adrenal glands stimulate the production of the primary copper-binding protein: ceruloplasmin. If this binding doesn't happen because of a weak liver or weak adrenal glands, among other things, then copper cannot be properly utilised.

Later note: It is reported that zinc deficiency can cause copper to not be utilised properly. At the same time, excess zinc can cause you to become copper deficient, which is a problem that has been linked to anxiety, hyperthyroidism, cardiovascular disease, multiple sclerosis and other problems. A correct balance between copper and zinc is therefore crucial.

It has been mentioned that copper is an ancient beauty mineral and prevents wrinkling. The colloidal form of copper is recommended by some. But what I am currently concerned with is getting the bad kind of copper out of my tissues, as adviced by the ARL Labs' hair mineral analysis & Dr. Lawrence Wilson's Nutritional Balancing Program. The bad kind of copper is copper that has not been properly utilized by the body, and thus it ends up collecting in the wrong places. The bad copper can act like free radicals, oxidising and damaging tissue.

Later Note: The following explanation is based on ARL Labs' and Dr. Lawrence Wilson's articles, book and websites. I later became highly sceptical of this information, for reasons which will be outlined in detail in another article. Note that in the results, shown here, I had too high zinc levels and too low copper levels. Regardless of this, I was deemed copper toxic and given zinc supplementation. Zinc is commonly agreed to cause copper deficiency when taken in excess. To cut the long story short, I now believe that the zinc supplementation I was adviced to take caused copper deficiency, and symptoms similar to hyperthyroidism, including anxiety. A more detailed explanation is given here: Hyperthyroidism Caused by Copper Deficiency?

Later note: Note that in my case many of the so-called copper detox symptoms lasted three years, until I realized to start supplementing with copper and to stay away from zinc supplements.

Dr. Wilson also warns against eating too much wheat, because it can be high in copper, cause inflammation due to its glutamine content, and be low in zinc. Inflammation, in turn, can deplete zinc from the body. (1)

My third and fourth hair mineral analysis reports showed elevated copper levels, indicating that toxic copper was being released from tissues. My adrenal glands had strengthened at the same time, as reported here, which is the most likely reason for the beginning of copper detox. Sluggish adrenal glands usually means that the body does not have the strength to push out many toxins, including copper. 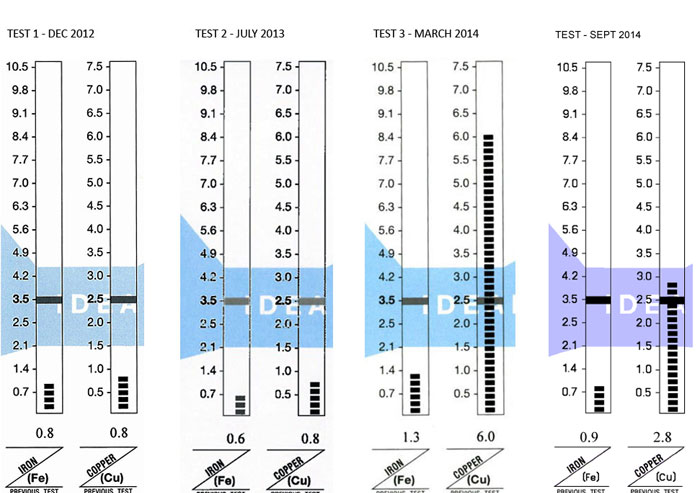 My copper detoxification started showing in my third mineral analysis, and has since slowed down, which the nutritionist thinks is a good sign.

I started experiencing anxiety around the time of my second test. Keep in mind, however, that each test shows an average accumulation of minerals from the three months prior to the test. Also, there is usually a 3-4 week delay before I get the test results, and the dates shown on the test result chart indicate the dates when I got my test results back.

The anxiety symptoms really started to show and bother me in July 2013, at which point the beginning of copper detox may have started. Then the anxiety got much worse, and in a lot later test three possible anxiety markers were shown: overactive adrenal glands, faster metabolism, and copper detoxifying. Anxiety can apparently be experienced by slow oxidisers when their metabolism speeds up suddenly, which was my case. So I am not sure whether the anxiety was a side effect of eliminating toxic copper, or whether it was a combination of many things.

Much later I started getting headaches, which could have been linked either to copper elimination or to some supplements I was taking.

Later note: My anxiety (and hyperthyroid) symptoms started when copper started to be excreted from my body. After suffering from this for three years I started to supplement with copper which seemed to help very quickly and the symptoms began to be eliminated. Therefore I came to believe that the anxiety was caused by deficiency of nutritious (bound) copper and not by detoxification of toxic (free) copper. I have explained why I came to believe this in more detail here.

Later note: After much experimentation I managed to eliminate my headaches, which were linked to a chronic sinus infection (sinus headaches), made worse by anything cold, including cold foods, as well as stress (tension headaches) and neck tension. Further notes on the headaches here.

Dr. Lawrence Wilson states in his book: Nutritional Balancing and Hair Mineral Analysis (1) that "everyone has zinc and copper imbalance today" (1). The reasons for this, he states, are:

Zinc and copper are 'twin' minerals because they influence each other. The goal should thus be to balance both minerals simultaneously.

Zinc can act as a calming neurotransmitter and is one of the 'sedative' minerals, with calcium and magnesium. Zinc is also a powerful antioxidant nutrient, whereas copper can act as an oxidant nutrient. Zinc appears to activate the frontal lobes of the brain, the so-called 'new brain' (1).

Later note: The fight between copper and zinc as the 'good nutrient' is to some degree a fight between the proponents of vegetarian and meat-eater diets. Much copper is available from nuts, seeds, soya, and avocado, whereas much zinc is available from animal-based products. Some proponents of zinc use it to argue against vegetarianism (including Dr. Wilson), stating that vegetarian diets result in copper toxicity. Proponents of copper, on the other hand, sometimes note that excess zinc may result from consumption of excess animal products. Please try to see through such attempts and do not make your decision based on your dietary beliefs! The balance between zinc and copper is a complex issue, and in my view the best approach is to carefully study these minerals, as well as their deficiency and toxicity symptoms, and experiment very carefully with each to see how you feel. To be completely safe, a doctor well versed in these topics should be consulted with, but it may be difficult to find one, and therefore many of us are left with the less safe option of experimenting on ourselves.

An elevated copper level in the hair mineral analysis can produce different symptoms depending on where the copper is lodged in the body. Excess copper is usually in biounavailable form and can cause inflammation and sometimes serious oxidative damage. Copper toxicity symptoms may include: inflammation, pain, menstrual problems, testicular pain, cancers, allergies, brain fog, emotional and mental illness, thyroid and liver disorders, etc. (1)

Copper and the Nervous System

"Dr. Eck called copper the 'emotional' or 'love' mineral because it has such as profound impact upon the central nervous system. The psychiatric implications of copper imbalance are tremendous. Most psychological and psychiatric conditions improve when copper is brought into better balance in the body.

"The overall effect of excess and biounavailable copper appears to be to increase most emotional activity in a human being, while zinc tends to balance the emotions. Dr. Eck read that copper stimulates the diencephalon, also called the 'old' or 'animal' brain. This can enhance a tendency for most emotional conditions, from depression and anxieties to autism, ADD, ADHD, brain fog, insomnia, epilepsy, fears, phobias, loss of concentration, aggression, violence, obsessive-compulsive behavior, bipolar tendencies, Tourette's syndrome and some schizophrenias. [...] These are so common and respond so well to nutritional balancing science it is a wonder more doctors are not aware of the importance of copper in mental illness."

Dr Wilson also cites some research studies in his book, which seems to indicate that higher copper levels correlate with more violent tendencies.

Dr Lawrence Wilson's book provides plenty of information on copper toxicity most of which is beyond the scope of this article.

Warning: Please also read this article about copper deficiency, as it may be an equally big, if not bigger, problem than copper toxicity.