New evidence shows that sugar, a highly processed diet, nitrates in food and fertilizers may be the causes of Alzheimer's disease, Lynne McTaggart writes, reporting in 'What Doctors Don't Tell You' magazine.

"...the epidemic of Alzheimer's is not a mystery, but another symptom of nutritional starvation," she states. 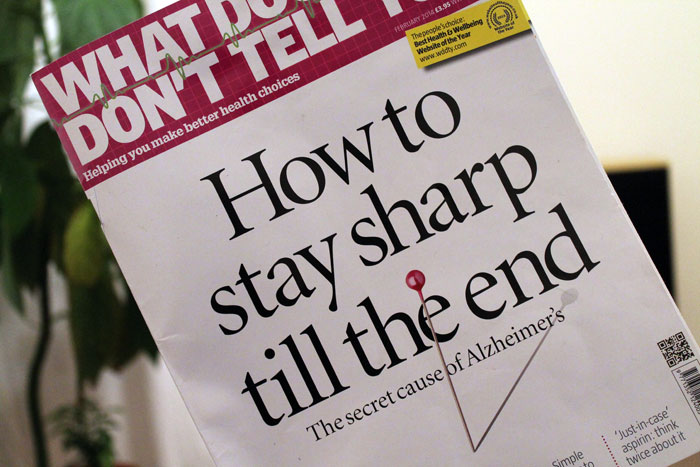 The secret cause of Alzheimer's, as featured in the 'What Doctor's Don't Tell You' magazine.

The research of Dr. Suzanne de la Monte on rats has shown that when their body is overwhelmed with high-sugar foods, such as processed foods and fizzy drinks, the effectiveness of the insulin receptors in the brain is compromised. Thus insulin is not taken up by the brain properly and without insulin, the neurons of her rats quickly deteriorated, plaque formed, and the animals showed clear signs of dementia. (1)

It has been long established that diabetes, as well as its precursor, the metabolic syndrome, is linked with a higher risk for Alzheimer's disease. Also, poor glucose tolerance in general has been associated with problems in brain function (cognitive impairment). (1)

What is different about Dr. de la Monte's findings is that type 2 diabetes on its own seems not to be enough to cause Alzheimer's disease and insulin resistance in the brain. Although the problem is very similar to insulin resistance elsewhere in the body, Alzheimer's disease has come to be called 'diabetes of the brain', because it seems specifically to be caused by disturbances in the brain's insulin receptors and insulin-like growth factors (IGF-1). Thus the name 'diabetes type 3' - because it is a different type of problem from diabetes types 1 and 2. (1)

"As with type 2 diabetes, it [is] a matter of the body being overwhelmed by glucose, which ultimately cause[s] insulin resistance. Too much sugar ironically might cause the brain to starve." - Lynne McTaggart (1)

The effect of alcoholism on the brain was already known to decrease insulin receptors, and Dr. Suzanne de la Monte decided to take the research further. She disrupted the path of insulin to the brain on rats and was surprised to find that they completely lost their memory. (1)

She then moved on to human studies and found out that in the most advanced stages of Alzheimer's disease, the insulin receptors were nearly 80 percent lower than in a normal brain. She also discovered that insulin and its growth factor IGF-1 were not able to bind to the right receptors anymore. (1)

"Insulin disappears early and dramatically in Alzheimer's disease. [...] And many of the unexplained features of Alzheimer's, such as cell death and tangles in the brain, appear to be linked to abnormalities in insulin signalling. This demonstrates that the disease is most likely a neuroendocrine disorder, or another type of diabetes." - Dr. Suzanne de la Monte (1)

"Up to now, doctors believed that insulin's job was simply to regulate blood sugar by alerting liver, fat and muscle cells to the location of sugar, so allowing it either to be used as energy or stored as fat. But scientists are now beginning to recognize insulin's vital role in the brain.

"Insulin helps neurons in the hippocampus and frontal lobes (the brain's centre for memory and reasoning) take up glucose for neuronal energy, and regulates neurotransmitters [...] It also helps with the function of blood vessels that supply blood to the brain. Finally, insulin aids the entire process of brain plasticity, where neurons are able to strengthen old connections [...] forge new ones and even change shape."

De la Monte's theory is that what happens to the body in Alzheimer's disease is essentially what happens to the rest of the body with diabetes. The pancreas produces insulin, and the job of insulin is to alert cells to the presence of sugar so it can be maximised for energy. Eating more sugar than the cells can absorb causes it to be stored as fat. (1)

Processed carbohydrates get converted into sugar very rapidly in the body as well, and so a diet high in sugar and processed carbs causes the body's liver, fat and muscle cells to become insulin resistant - they begin to ignore insulin. More insulin is needed of the pancreas in response to higher sugar levels in the blood, and eventually it gets fatigued and begins to shut down. (1)

The symptoms of this vicious circle manifest as diabetes.

Nitrates in Food Another Cause of Alzheimers

Dr. de la Monte also found that nitrate caused immediate cognitive impairment in rats. This suggests - given that nitrates have the same effect on humans as rats - we should be avoiding preserved foods, processed meats, and fertilizers, as these all can contain nitrates. Preservatives and colourings in foods like bacon, sausages, smoked turkey and ham, processed cheeses and even can contain nitrates. Also, grains, vegetables and fruits grown in fertilized soil can have nitrates in them. Frying and flame-grilling food can make the situation worse. (1)

"As with long-term exposure to highly processed high-sugar foods, de la Monte now believes that exposure to low doses of sodium nitrates through food and pesticides over years may have contributed to our present epidemics of both diabetes and Alzheimer's. [...]

"Diabetes and fatty liver disease [...] skyrocketed during the years 1970-2005, when the fast-food chains' and meat-processing companies' sales increased more than eightfold, and grain-processing increased fivefold, particularly of those grains grown using nitrogen-containing fertilizers."

The good news is that you can avoid much of the nitrates by eating organic.

Nitrates have not only been linked to Alzheimer's disease by researchers but to cancer, diabetes and Parkinson's disease as well.

McTaggart states that recent research seems to indicate that Alzheimer's disease, like many other modern degenerative diseases, may have one single culprit: sugar. And correspondingly, they say that simple dietary management plus some nutrients would seem to offer more promise in preventing the disease than any 'pharmaceutical magic bullet'. (1)

"The best way to prevent Alzheimer's disease is to clean up your diet right now, avoiding sugary foods, processed carbohydrates that convert into sugar quickly and foods with nitrates [...]

"...many natural herbs and nutriceuticals have solid clinical or laboratory evidence of achieving the seemingly impossible: turning around neural damage that has already begun. And unlike drugs that can modify symptoms, these herbs and nutrients appear to modify the entire course of disease, delaying and even reversing aspects of it."

Curcumin, a compound found in the spice turmeric is a powerful antioxidant and a powerful beta-amyloid buster, Lynne McTaggart says. Beta-amyloids are 'plaque' that consist of proteins that form on the brain cells - a specific brain abnormality seen in Alzheimer's. Curcumin has been shown to stop this plaque from forming and even to disassemble it once already formed. (1) 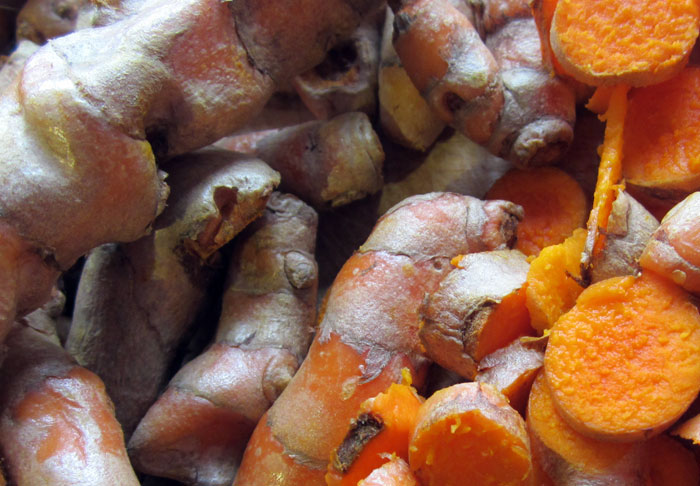 Turmeric, a ginger-family root, seems a promising remedy for diabetes type 3, i.e. Alzheimer's disease, when combined with correct diet and other nutritional supplements. (1)

The antioxidant amino-acid L-Carnitine plays an essential role in releasing energy from fat to the cells. L-Carnitine supplements have been shown in animal studies to decrease the build-up of beta-amyloid plaque and in one study, Alzheimer's patients experienced significantly less deterioration in brain function and better focus, when taking 2-3g of L-Carnitine for three-to-six months. This amino acid seems to retard mental decline especially in younger patients, and some studies got good results with a mere 12-weeks of use. (1)

Patients taking 2,000IU of vitamin E daily were shown to reduce their cognitive decline by almost 20%. Especially the form of tocotrienol as a supplement is recommended by McTaggart. (1)

Ginseng has been shown both to reduce the formation of plaque in the brain and to boost the body's ability to clear it. In one 12-week study the dosage of 4.5g per day was shown to cause 'continued improvements' in patients. (1)

The Chinese 'ground pine' (clubmoss) Huperzia serrata has been used as an age-old Chinese remedy for senile dementia. A natural extract called 'Huperzine A' has been shown in studies to greatly improve both disease severity and daily activity levels. Ankle swelling and insomnia can be caused as side-effects of this remedy, however. (1)

Increasing the levels of DHEA hormone has been shown to cause the body to produce new neurons. (1) DHEA can be taken as a supplement, although personally I wouldn't, since hormone supplements can disrupt the glands and cause them to stop producing hormones. Strengthening the adrenal glands is a better way to enjoy the benefits of DHEA, dubbed the 'youth hormone', as stronger adrenal glands can produce more of it.

Heavy metal toxicities, especially mercury, have also been implicated in dementia. Lynne McTaggart recommends chlorella, spirulina and a daily consumption of coriander (cilantro) to begin to detoxify these, and to have chelation treatment if your toxic metal levels are especially high. (1)

Source: Lynne McTaggart: "Brain Drain" in 'What Doctor's Don't Tell You' magazine (WDDTY), Feb 2014. The headline on the magazine cover was: "How to Stay Sharp till the End: The Secret Cause of Alzheimer's"

"There is a Cure for Diabetes" by Dr. Gabriel Cousens (book):

Superjuice Me documentary shows people reporting that a 28-days juice fast improved their diabetes symptoms. Be cautious if juice fasting with insulin resistance, however, because fruit an vegetable juices can be very sugary. The participants in the documentary fasted under a doctor's supervision and presumably with specific kinds of juices.