I made some raw pickles based on Alissa Cohen's recipes: Dried figs pickled with freshly-squeezed orange juice and clove; red onions pickled with raw apple cider vinegar (ACV), vanilla and red cabbage juice, etc.; pine nuts and currants pickled in raw coconut vinegar; and cauliflower pickled with raw ACV, turmeric, cloves, garlic, etc. Some of these will be ready to eat tomorrow, some in three days. I made very small portions of each, approx 200ml, to test which ones I like and then make larger quantities. Looking forward to tasting them! 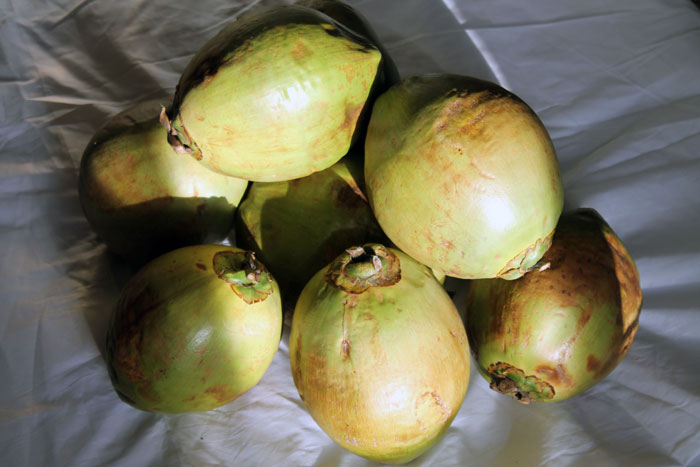 Later on during this raw food challenge I regretted having bought the young coconuts.

Stopped the blood electrification after 40 mins to receive a delivery of 12 young coconuts! Drank a glass of coconut water and continued with another 20 mins (approx.) of 'electricity'.

[Later note: I regretted buying the young coconuts afterwards, as I realized that the water was too sugary for drinking for me. In addition, some of the coconuts hardly had any 'meat' in them and also, they started drying up and going bad quite quickly! I thought that since they came all the way from Costa Rica, they would last for a while in my kitchen. But probably they had been kept frozen until shipping to me.]

I still have the taste of the green juice coming up in my throat, as if it was 'repeating' on me, i.e. not digesting very well. Very strange as it should be the easiest thing in the world to digest.

Generally I have been feeling quite well today, still not very energetic though, but much better than yesterday. I guess this is due to having slept quite late this morning.

5.42pm: My face is really heating up again, which is a typical reaction I have towards sugar - I seem to be extremely sensitive to it. But I haven't had any non-raw sugar today (though I suspect the coconut water was the culprit here). No other feelings of blood sugar imbalance, though, possibly because of the electricity.

6.20pm: Smoothie: 1tbsp spirulina, one pink grapefruit, water. Hoping that the protein will help with the sugar intolerance.

While on this raw food challenge my weight has been up and down, starting from 59kg on day 1, then quickly dropping to 55.5kg at its lowest, and rising to 59kg again! Also I still have a bit of a belly, another sign that sugar might be a problem.
I'm feeling a bit weak now, a typical symptom of having had too much sugar.

I have decided to convert to low-sugar raw food diet now, because I have so long had the experience - not only during this raw food challenge - that sugar makes my body and mind weak in so many different ways. For a long time I didn't want to believe the nutritionists telling me that sugar might be a problem - especially because in my mind fruit was the ultimate natural food - but in the end I had to believe them as my symptoms kept getting worse, and were so clearly linked to sugar consumption, even from sugary fruit, like mangos.

As mentioned earlier, there are many people who advocate either juice fasting or a low-fat, high-fruit raw food diet as a solution to reverse diabetes and blood sugar problems.

During this raw food challenge I will go by my own experience and what seems to work for my body. Right now, too much sugary fruit does not seem to work, despite the fact that I am eating only a little fat and lots of mineral-rich greens and raw foods.

Brian Clement from Hippocrates Health Institute has this to say:

[Brian Clement:] "...so the whole idea that fruit is normal - yet, it was normal hundreds of thousands of years ago. It's no longer normal. So we pulled it out from our diet and took it away from people with viruses, molds, yeasts, fungus, bacteria, certainly low and high blood sugar, hypoglycaemia and diabetes, but we were the oddballs then."

[Interviewer:] "So all the fruit juices and smoothies that people are eating that are mostly fruit are actually not very healthy?"

[Brian Clement:] "Not healthy. They are unripened, even if they're organic. [...] A little bit of ripe organic fruit when you don't have a disease is perfectly fine. We did the work at Tufts University when we were still in Boston. We found out that a healthy person can eat up to 15% of their diet by weight as ripe organic fruit and you won't have extra sugar in the bloodstream. Once you get over a disease, which is your objective, you can eat that much fruit, but you always have to make sure it's ripe."

[Interviewer:] "I'd always heard that fruit is supposed to be nature's perfect food for the human being, but perhaps that was the original forms of fruit and not the hybrids we're eating now?"

[Brian Clement:] "You hit it. I honestly believe the original diet of man was fruit. Geological anthropologists tell us that we had seven times more oxygen than we're breathing now. Can you imagine if they gave us seven times, or six times, or four times more, we'd all pass out. It was a totally different environment on the planet then and people were also different than we are today. The other thing that you have to understand is that all the original fruit had little to no sugar in it, plus you were expanding massive amounts of energy. Primal people were constantly moving. They were either laying down sleeping or moving. Even 700 years ago, we were nomadic, moving."

- The Spirit of Change Magazine: "Let Food Heal Your Body - An Interview with Dr. Brian Clement"

In addition to Brian Clement, most nutritionists these days - raw foodists or not - seem to advise restriction in the amount of sugar and carbohydrates one eats.

So there are compelling arguments and testimonials to both directions, and it seems, once again, that people may just simply be different, and thrive on different types of diets. Some doctors, such as Dr. Mercola, even divide people into 'carbohydrate types' and 'protein types', using certain criteria to determine which might work best for each person's body.

Even though the fruitarian route (high-fruit, low-fat) may work for some people, the diet is very specific and strict, whereas the other option - sugar restriction - seems to work with a variety of diets.

I have tried fairly low-fat, fairly high-fruit approach now for six days while doing this raw food challenge and can conclude that it unfortunately does not seem to be working for me. Perhaps I didn't try for long enough but how I feel seems to get worse every day on this diet - as I'm writing this I am feeling the low blood sugar symptoms again (very weak, as if I have a cold coming on). Or perhaps it is due to parasites. I am not sure, but my objective right now is to feel as good as possible as quickly as possible so I will continue this raw food challenge in low-sugar form.

[Later note: Unfortunately these six first days of this raw food challenge included some sugary foods that had likely been heat-dried, notably dates. So, in fairness, it may be worth running this experiment again while ensuring very high-quality and 100% sure to be raw fruits.]

[Later note: Brian Rossiter, a 'near-fruitarian' whom I interviewed, suggested that I continue eating a low-fat, high-fruit, eating plenty of bananas mixed with greens in a blender. He thought the greens would help to tolerate the sugar better, presumably because fibre slows down the release of sugar. I might try this in the future but now it feels like a too strict diet and too risky approach.]

Regarding diabetics and juice fasting, I think that probably 1) the diet has to be low-sugar and/or 2) the people who got better very quickly had a background of quite unhealthy eating, so the new diet was able to quickly reduce their weight and make them stronger.

8.30pm: I am feeling quite weak, as described above, my teeth and jaw feel 'tense', and my face is still a little red, though not much. The blood electrification didn't seem to stop the 'low-blood sugar' or 'sugar intolerance' symptoms coming up this time.

9pm: Ate an avocado with a little olive oil on top.
Have a slight headache.

The Hippocrates Diet according to Brian Clement consists of: 1) blue-green algaes 2) sea vegetables/ sea plants 3) grasses, seeds and sprouts. These are the core and contain all the needed nutrients. Low amounts of ripe organic fruits when you are healthy, and none when you are fighting a disease. Low-fat, low-sugar diet.

In addition they include fermented foods and germinated nuts, legumes and grains in the diet at the Hippocrates Health Institute. Brian Clement highlights the fact that three first food-groups mentioned are able to provide high amounts of protein, perhaps implying that high-protein diets are ok or good.

I found a note somewhere by Dr. Brian Clement that oats are healthy so I will make some raw oat groats for breakfast tomorrow. Specifically, he said that the 'energy givers' were the grains - wheat (!), oats, rye, barley, buckwheat - and the legumes - pinto, navy, red and white beans. He says that germination of the grains removes certain metabolic inhibitors.

I'm surprised he mentions wheat, though, which is very hybrid and manipulated by man these days, precisely the criticism he himself had about fruit. I assume he means something like kamut or just eating the grass (sprout) of the wheat and not the part with gluten.

Transdermal magnesium oil on the skin after the bath (supposed to help with blood sugar problems).

So far on this raw food challenge I feel a lot worse than usual, unfortunately.

Went to bed at about 00:30pm and had no trouble falling asleep this time. Even if I wasn't sleepy at all when going to bed. 2 drops of angelica oil on my forehead and temples may have helped me fall asleep.

Continue to Day 7 of the raw food challenge...