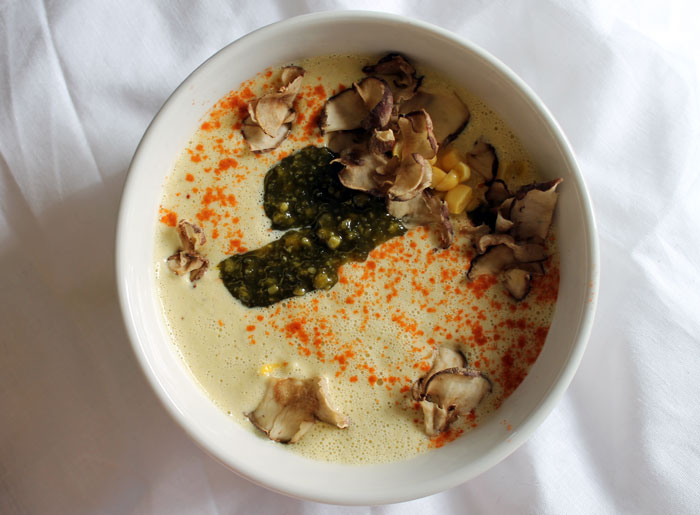 Weight: 55kg. Even though I am now at my ideal weight, my face still looks puffier than ideal and my chin looks fat. I guess this will gradually improve as I continue on raw foods.

9.30pm: Woke up. Slept very well. My mouth is very coated - detox ongoing.
I feel normal this morning, not better or worse than usual. But I do feel healthy and happy, not tired.

My menses started! So far no pain at all, and also no other 'warning signs' that I usually get.

[Later note: Actually, this was not the start of my real menses... Just a little spotting. The real ones started on day 15, with much less pain than usual.]

12.50pm: Avocado with salt and olive oil - tasted so good. These are the same Tesco avocados that tasted metallic earlier on during this diet.

Did the 'spine twist' stretch exercise. It always makes my body go into the 'trauma release exercise' shake mode. This time I felt pain deep inside my upper back - between the spine and the shoulder blade on the right hand side - felt like muscle tension, concentrated in a very small area. It didn't get released although I stayed in the stretch for a while. I haven't noticed this before.

Using my oven at 50 degrees Celsius (122 degrees Fahrenheit) to dehydrate thin slices of Jerusalem artichoke. I propped the door open slightly to reduce the temperature so that these will count as raw.

3pm: Feeling a bit tired because of the exercise earlier.
Had tomato soup (cherry tomatoes, a lot of olive oil, salt, dried oregano).

3.45pm: I have to take a nap. I wonder if I feel tired because of too much fat in the soup.

[Later note: There was some indication that B12 and/or iron late in the evening might make it harder for me to fall asleep.]

6pm: I wonder if the exercise with heavy weights was a bit too much for me, or if I didn't eat enough protein. I should probably get into a habit of pre-exercise and post-exercise protein snack/meal. I'm feeling a little bit tired now and especially my arms feel a bit weak.

My menses have started but not really properly, since there is almost no flow. Still no sign of pain whatsoever.

My sense of smell is going strange. Cooked salmon today smells like cooked beans that have gone off.

Snacking on sprouts and almonds (not sure if the almonds are raw or not).

Went to bed at 11.30pm but couldn't sleep until about 1am. Had some heart palpitations because of money worries-related anxiety. Perhaps the fact that I took B12 and iron late at night made me unable to sleep, and then anxiety followed. I eventually fell asleep with the help of valerian tincture and angelica drops, and after cooling the room by opening the windows.

[Later note: A funny thing I have noticed generally is that if something stops me from sleeping, causing insomnia (e.g. eating too much sugar late at night or a supplement), then while lying awake unable to sleep, some form of anxiety or worries usually appear. So it may be that the physical cause of insomnia is the ultimate cause of bed-time anxiety, and not necessarily always the other way around. Usually anxiety itself has been labelled the cause of insomnia but it seems that sometimes it may also be the insomnia causing anxiety.]

So my anxiety problems have not yet completely gone on this raw food challenge but I did feel that it was easier than usual to calm myself down. The anxiety feelings tend to escalate easier when I am very tired/ have been eating sugar or drinking alcohol/ have eaten many processed carbs.

Something woke me up at 7.30am so I decided to get up as I wasn't feeling too tired.

Yesterday seems to have been just a little bit of menstrual flow in the morning. There has been no pain and no flow today.

2.10pm: Feeling slightly sick, as if the soup is not digesting too well. Feel like there is a 'lump' or something stuck in my throat too. Slightly tired but fine otherwise. Maybe it's the dehydrated jerusalem artichokes.

I keep getting feelings in my belly as if the menses is only starting, not pain, just slight feelings.

Feel quite tired now with a slight headache. (Are dishes with lots of olive oil causing me to be tired?)

5pm: Just woke up. Been sleeping for probably at least two hours. Fell into a very deep sleep, similar to what happens to me sometimes after acupuncture or after a deep-tissue massage. So either this is normal detox (quite possible) or it's because I had too much sugar and fat today. I also felt very light-headed when getting up (low blood pressure). I don't usually get that at all.

[Later note: During this raw food challenge I experienced a lot of tiredness. During the first week because of too much sugar, and between days 11 and 21 most likely because of hormones, due to the menstrual period. Not sure if these too factors were enough to explain it all, though.]

Went to bed at midnight. No problem falling asleep despite having slept during the day.

[Later note: Earlier during this raw food challenge taking megadoses of C-vitamin caused me to not be able to fall asleep in the evenings.]

Feel good today - normal. Not better or worse than usual.

I felt a bit sick after the smoothie and supplements. Maybe I drank too much too quickly.

1.40pm: Drinking hot schizandra berry tea. So far I haven't had any hot drinks during this raw food challenge, this is the first one.

The only reasons for not drinking hot tea as a raw foodist might be:

On another note, I seem to be able to take stress a bit better today. I still get stressed out but my face doesn't go red and I don't feel exhausted afterwards.

6pm: Had a green salad with pea chutney and tomato. Green peas are a good source of protein.

Feeling very well and normal today. My nose is a bit sniffly but no red face, no anxiety, no heart palpitations, don't get cold easily, still more flexible, no cough after eating, no achy arms and legs, no fatigue, no low energy, or any other problems.